My husband has always envisioned himself as an outdoorsman. His dream vacation consists of a trek to the mountains, encompassing New York State land, hiking trails, a river or a stream, and a starlit night. A tent, a lean-to or better yet an RV would be his ideal accommodation. Many moons ago, before we were married, I too, felt the pull of the outdoors. It was fun communing with nature, hearing the crickets chirping at night, sitting around the campfire as the flames flickered and danced in the moonlight. Camping had its place.

As one  year melded into another, the lure of camping faded into the recesses of my mind. My concept of camping transitioned from an outdoor wooded campsite to the well-heeled comfortable environs of a Marriott or Hilton Hotel. Three kids and a well-worn career later, the idea of sleeping on the ground on a blow up mattress in a 4 or 5 man tent, was less than appealing. Factor in rain, cold and flying bugs and insects of any and all species, and the thrill of camping became less and less appetizing.

Fast forward to retirement, my husband’s that is. An RV was the number one item on his bucket list. He must have visited every RV dealer and attended 100 RV shows from Florida to Maine. Every time there was an RV show, he wanted me to go. I attended the first few shows held closer to home.  For me, climbing in and out, of what felt like hundreds of RVs, was less than exciting,  On the other hand, my husband was like a kid in a candy shop. Oohing and ahhing with each step, his excitement was palpable.  I finally stopped going. “When you’re ready to seriously buy an RV, I will go”,  I told him, not really believing that he would realize his dream.

As the years post retirement elapsed, I heard less and less about the RV but I caution you that the universe has a funny way of conspiring to make things happen. Two of our couple friends are into camping, one couple loves to camp in rustic cabins, while our other friends are RV aficionados and owns an RV the size of a city bus. As we thoroughly enjoy the company of both couples, it was very easy to be talked into a few “camping” weekends.  As my husband’s thirst for an RV was rekindled with each camping trip, in my mind’s eye, he was still in the dreaming stage.

Shock of shocks, one day last January, my husband told me that he found an RV he wanted to buy. Still not believing him, I’ve heard this before, I told him to go ahead, he should realize his dreams! Well to my surprise he did!!

At the beginning of the camping season, he took the requisite class from the dealership, hitched up the trailer to his truck, and happily made his way to the campsite he affectionately called “The Hand of God” for years.

It took me several months to make my way up to the campsite, as I waited for my own retirement to take place. The weekend we planned to go rained incessantly; as I said,  the universe has a sense of humor! Settling in for the weekend, I began to realize the possibilities of life with an RV.  Having a mobile house on wheels might make traveling much more cost-effective, contained, and accessible. Being retired, we can take our time and visit as many cities and states our schedules allow. Hmmmm……. the prospect of life in an RV suddenly seems more appealing.
We haven’t yet embarked on our first trip in the RV but it’s safe to say we are in the planning stages. Who knows where our first destination will be but one thing  know for sure, and that is between the two of us, it will definitely be an adventure. 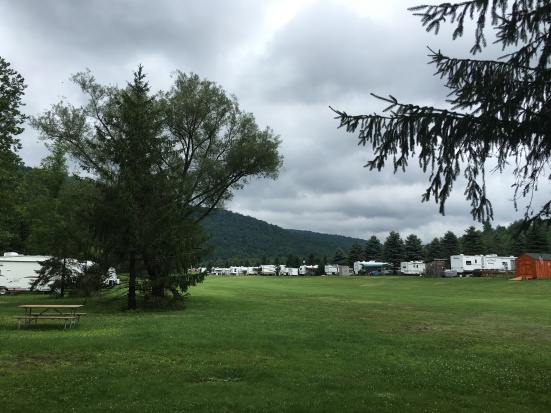 Error: Twitter did not respond. Please wait a few minutes and refresh this page.

RainbowKinect is an interactive forum geared towards today's modern family. If you are a Baby Boomer with adult children, grandparents raising grandchildren, part of today's sandwich generation, a same-sex couple with or without children, or living in a multi-generational household, RainbowKinect encompasses YOU!